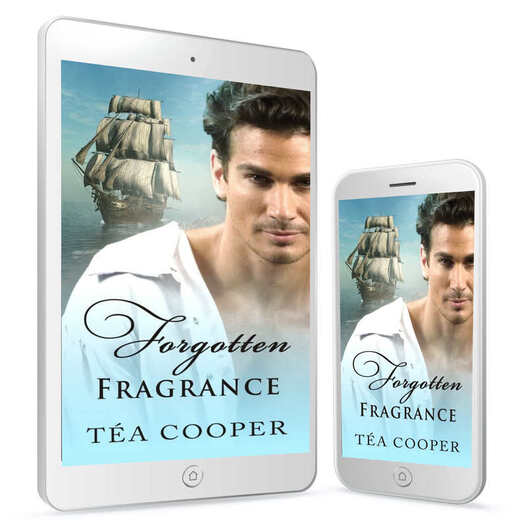 Only one woman can confirm his innocence, and release him from the torments of his past.
Determined to throw off the shackles of her convict past, Charlotte Oliver accepts her employer’s marriage proposal, even though she does not love him, and together they board a refitted whaling schooner bound for Sydney to begin their new life.
But life has a way of disrupting plans, and during the voyage the Zephyrus undergoes a mutiny. Captain Christian Charity loses his ship, but he also risks losing so much more. Charlotte has, in her possession, a tiny blue bottle and an Angel coin. On their own, they mean nothing more than a keepsake, but to Christian, they could mean everything – a past remade and a future with love.
FORGOTTEN FRAGRANCE is available digitally or in large print from the following retailers.

"I’ve adored Téa’s other Oz-toricals, and I’m happy to report that Forgotten Fragrance is another winner."
My Written Romance
Tea Cooper knows how to draw you into a story and keep you there. This is a must read...a whiff of something delightful...the characters are distinct and many-faceted, the writing strong and compelling.
#1 Amazon Australia Historical Romance